About John’s Section: For Reasons Other Than Strength

John Jones looks at the self-same hills that fill Hartill with such delicate flights of astonishment. He is a farmer and he encounters the land at unselected times. For him the landscape that is Hartill’s treasure scape, pleasure trigger and holy land, is an implacable, indifferent, indeed often hostile place of work. “A farm” he says he “thinks to own” but which he finds “owns him”. Enactments of death, images of death, actual deaths of stock and vegetation are frequent in the work as though the life of the land were unimportant when taking place in such crass silence. The verse, then, the opposite of lyrical. The spaces are important whether the reader sees them as blank paper or silent time, emphasising honed and polished groups of words that separate them. The words themselves are terse and taciturn, taking the monosyllables and the stoicism of the countryman and enhancing it, so that it becomes poetic rhetoric, sledgehammer blows of economy and understatement dealt by a powerful man who finds himself helpless. 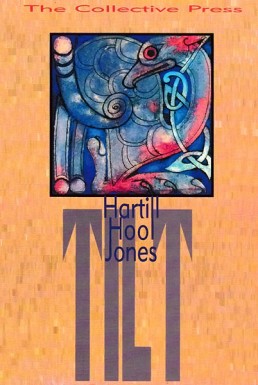 “Tilt is a distillation of the work of three of the finest poets around. From Graham Hartill comes the assured shamanic ecstasies, gridding Chinese lines of power down onto Welsh peaks, graves and saints; from John Jones the most delicate and cunning of pastoral miniatures, Zen conundrums; and from Ric Hool intense thought compression, exterior-interior relationships, lean, spare and minimalist. Quite frankly, this collection is a treat that poetry lovers cannot afford to miss”.

“Three poets speaking out of a unique landscape. A distinct sense of place and exploration of consciousness within it. A seeking and a stating of it, however difficult to define. Looking out and looking in; I enjoyed this collection with it’s flashes of Whitmanesque wit”.